Despite receiving $27 billion from the tobacco settlement and tobacco taxes, the states continue to severely underfund tobacco prevention and cessation programs proven to save lives and money. In the midst of a youth e-cigarette epidemic, such programs are as critical as ever.

Since the states settled their lawsuits against the major tobacco companies in 1998, our annual reports have assessed whether the states are keeping their promise to use a significant portion of their settlement funds – estimated at $246 billion over the first 25 years – to attack the enormous public health problems caused by tobacco use in the United States.

Despite receiving huge sums from the settlement and collecting billions more in tobacco taxes, the states continue to shortchange tobacco prevention and cessation programs that are proven to save lives and reduce health care costs. As the nation continues to face dual health threats from an unprecedented respiratory pandemic and a youth e-cigarette epidemic that threatens millions of young people with a lifetime of addiction, most states continue to shortchange programs designed to prevent kids from using tobacco products and help tobacco users quit.

In the current budget year, Fiscal Year 2022, the states will collect $27 billion from the settlement and taxes. But they will spend just 2.7% of it – $718.5 million – on programs to prevent kids from smoking and help smokers quit. This total is a 9.5% increase from last year but still barely a fifth (21.7%) of the total funding recommended by the Centers for Disease Control and Prevention (CDC). The top three states in actual spending (California, Florida and New York) spent a total of $365.4 million or more than the other 47 states and Washington, D.C. combined ($353.2 million). A handful of states, though, show a promising path forward for other states to follow.

The overall increase in spending can be attributed primarily to three states – Oregon, California and North Carolina. Oregon’s increase is due to a $2-per-pack tobacco tax increase voters strongly approved in 2020, with some funds allocated for tobacco prevention and cessation programs. California’s spending has been strong since voters there overwhelmingly approved a $2-per-pack tobacco tax hike in 2016. North Carolina has additional funds from their recent legal settlement with Juul, the company most responsible for causing the youth e-cigarette epidemic.

States must do more to fight tobacco use – still the nation’s No. 1 cause of preventable death and disease – to accelerate progress and confront the growing epidemic of youth e-cigarette use in America.

Click on each state to view the full data. Follow this link for information on the District of Columbia. 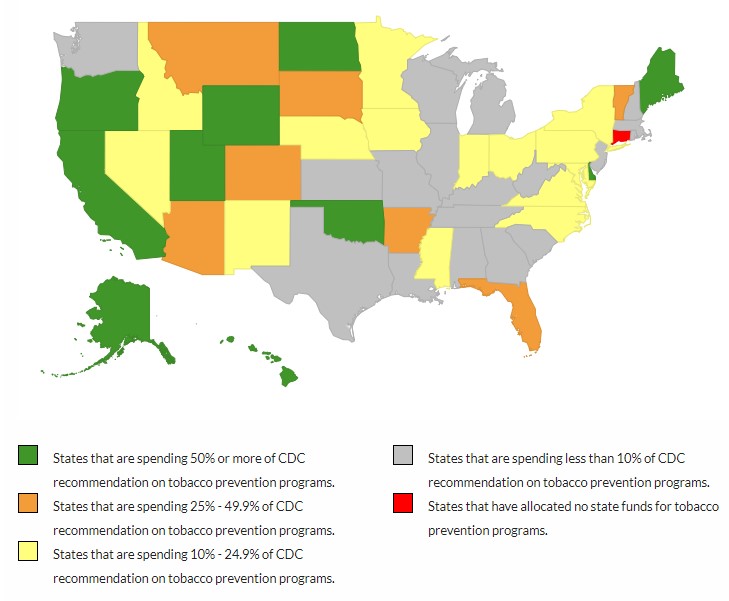 Other key findings include:

Along with separate policy actions, including higher tobacco taxes and comprehensive smoke-free laws, state tobacco prevention programs have helped drive down smoking rates to record lows – 14.0 percent among adults and 4.6 percent among high school students. But tobacco use still kills more than 480,000 Americans and costs the nation over $226 billion in health care expenses each year.

Our progress shows that the battle against tobacco is entirely winnable if proven strategies are fully implemented. But enormous challenges remain. The latest government surveys show that 20.8% of U.S. adults and 23.6% of high school students still use some form of tobacco. The U.S. is also facing large disparities in who still smokes. Adult smoking rates remain the highest among people with lower income and less education, residents of the Midwest and the South, American Indians/Alaska Natives, LGBTQ Americans, those who are uninsured or enrolled in Medicaid, and those with mental illness. In addition, Black Americans die at higher rates from smoking-caused diseases, in large part due to the tobacco industry’s predatory targeting of Black communities with menthol cigarettes.

The report comes as youth use of e-cigarettes remains a serious public health problem. With 2 million U.S. kids using e-cigarettes, including 11.3% of high school students, states should be devoting more of their tobacco dollars to help fight this epidemic.

On the 23rd anniversary of the tobacco settlement, it is time for a renewed national commitment to finish the fight against tobacco, eliminate the death and disease it causes, and end the youth e-cigarette epidemic threatening to addict a whole new generation. With bold action, our nation can make the next generation tobacco-free. 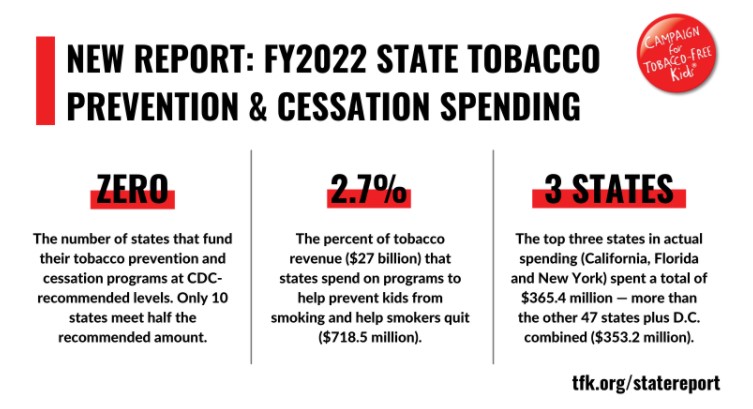 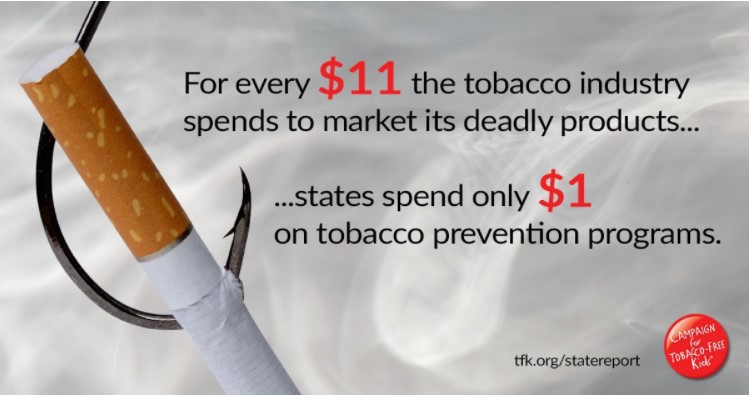 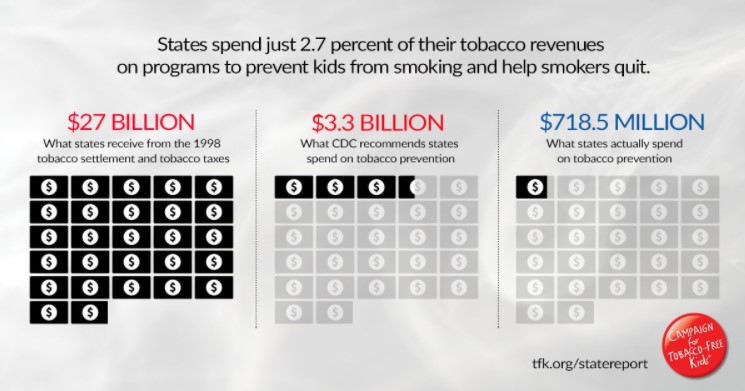