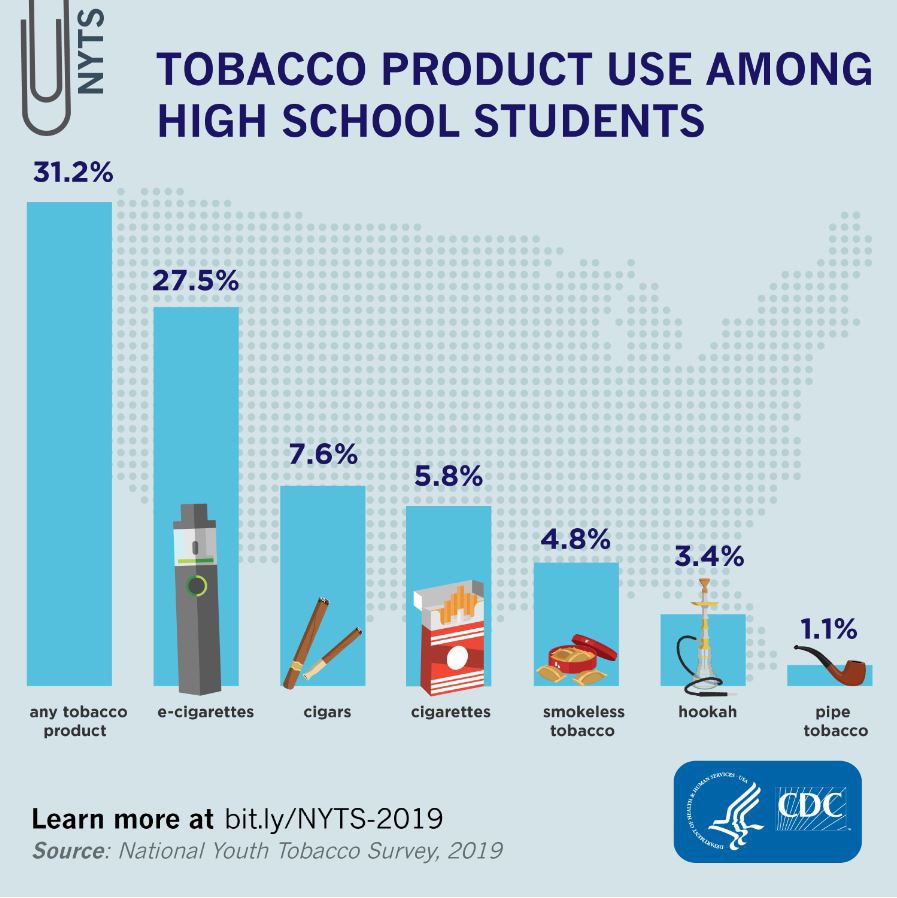 About 6.2 million U.S. middle and high school students were current (past 30-day) users of some type of tobacco product in 2019, according to new National Youth Tobacco Survey (NYTS) data released in today’s Morbidity and Mortality Weekly Report.

“Our Nation’s youth are becoming increasingly exposed to nicotine, a drug that is highly addictive and can harm brain development,” said CDC Director Robert R. Redfield, M.D. “Youth use of any tobacco product, including e-cigarettes, is unsafe. It is incumbent upon public health and healthcare professionals to educate Americans about the risks resulting from this epidemic among our youth.”

Data on youth tobacco-product use

In collaboration with the U.S. Food and Drug Administration, CDC analyzed data from the 2019 NYTS. NYTS has been conducted periodically during 1999–2009 and annually since 2011. From 1999 through 2018, NYTS had been conducted in middle and high schools via paper and pencil questionnaires. In 2019, NYTS, for the first time, was administered in schools using tablet computers.

“We are fully committed to preventing children from using harmful tobacco products, including e-cigarettes, and will continue to develop policies that will achieve that objective as soon as possible,” said Admiral Brett Giroir, M.D., HHS assistant secretary for health and acting FDA commissioner. “In addition, we will continue taking other actions to address this shocking epidemic of youth use, including aggressive enforcement and compliance efforts and evidence-based public education – which includes investing in campaigns to educate youth about the many dangers of e-cigarette use including addiction, behavioral disorders, and other health risks.”

What more can be done about youth tobacco use?

Given the evolving variety and availability of tobacco products, surveillance for all forms of youth tobacco product use and associated factors is important to inform action at the national, state, and community levels.

CDC works 24/7 protecting America’s health, safety and security. Whether disease start at home or abroad, are curable or preventable, chronic or acute, or from human activity or deliberate attack, CDC responds to America’s most pressing health threats. CDC is headquartered in Atlanta and has experts located throughout the United States and the world.